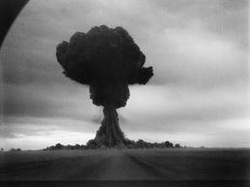 At a remote site at Semipalatinsk in Kazakhstan, the USSR, explodes its first atomic bomb called First Lightning, to measure the effects of the bomb, the Soviets built buildings, bridges and other structures in the area of the site. They also put animals nearby so that they could see the effects of nuclear radiation on mammals, and the bomb destroyed the structures and animals. The people who worked on the bomb would have been executed if the testing of the bomb did not go as planned so since it exploded they were honored. 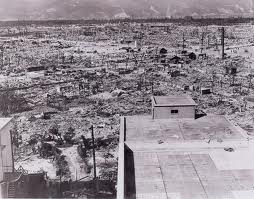 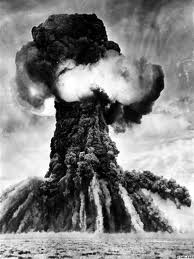 On September 3, a United States spy plane flying over the coast of Siberia picked up the first evidence of the explosion. Later that month, Truman said to the Americans that the Soviets had a bomb. A couple months later, Klaus Fuchs, a German born physics who had helped the United States build an atomic bomb was arrested for giving nuclear secrets to the Soviets. While he was at the United States development headquarters during World War II, Fuchs gave the Soviets information about the United States atomic program, with blue prints for Fat Man, which was a bomb that was dropped on Japan and things the Los Alamos scientists knew about the hydrogen bomb. Because of all of this, Truman was forced to develop the hydrogen bomb which was 100 times stronger than the atomic bombs. 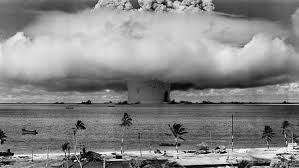 On November 1, 1952, the United States successfully exploded the world’s first hydrogen bomb in the Pacific Marshal Islands. The bomb instantly destroyed the island and left a crater more than a mile wide. A couple years later, on November 22, 1955, USSR exploded their hydrogen bomb, and the world lived in threat of them.